No one is safe

Well, Charlie developed his fever last night. (He and Wes tied for the highest fever: 101.9.) Wes' fever is down in the 99s and Win seems to be feeling much better, although he now has a runny nose.

And in other Win news...he figured out how to open a window. We have all of the chairs in the playroom pushed under the windows, to block the radiators. (The boys think it's a fun game to pull the radiator covers off, which then exposes all sorts of sharp metals, etc.) So now that the boys can pull themselves up on the chairs, we moved all of the screens up and have started opening the windows from the top. But, as we just discovered, Win can slide the bottom window open - and there is no screen to prevent him from falling to the ground!

Time to screw the radiator covers to the wall and move the chairs away from the windows!
Posted by The Bunns at 9:48 AM 1 comment:

The weekend started on such a high that I suppose the only direction it could go was down. Friday was filled with not one, but two playgroups for the boys - one with women from our new town and another for multiples. Here is a photo from the latter, minus Winston and an additional set of twins. 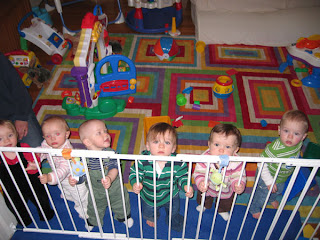 But the best part of the day was that we had our first date night since December! We went to Blue Ginger and had not only an amazing meal, but an amazing time.

On Saturday, we visited our dear friends Adam, Jen and their daughter (and our God-daughter) Piper. It was such a wonderful time with friends, even though the boys trashed their house. Adam did a great job entertaining the boys with his bass and guitar - even allowing the boys to play the guitar for themselves. (Which meant banging, slamming, sitting on the guitar...)

Saturday night, we happened to notice that Win felt really warm. As we undressed him to take his temperature, we noticed a rash of small red bumps covering his entire body. Motrin seemed to help, but then Sunday morning, I woke up with a sore throat and Wesley had a fever. The doctor we called advised it was just a virus, but we decided to take them to the doctor's office Monday morning once we saw red bumps on the back of Win's throat. Sunday was a rough day filled with sick babies and pouring rain.

But thankfully, Win's fever was gone as of this morning, so we decided to forgo the doctor's visit. Charlie is next in line and will probably get his fever today. Fun!

And on top of everything, Win fell off the arm of the couch yesterday (about 3 feet off the ground). Thanks be to God that he was not harmed! And everyone is getting their molars in. So overall, the boys aren't so happy. So I guess things can only get better from here...right?
Posted by The Bunns at 1:07 PM 2 comments:

As a wonderful surprise, Nanna & Poppa sent a gift to the boys, which they not only loved, but loved to open! The outfits are perfect UVA colors for football season!

Here's the 14 month olds' guide to opening a gift: 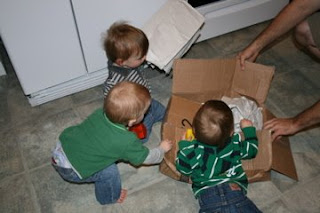 2. Eat the paper filler while your brothers pull out the gifts. 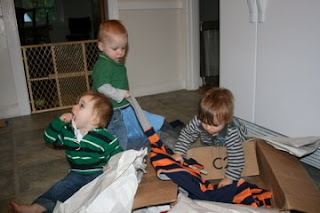 3. Crawl in the box. 4. Close your brother in the box he just crawled into. 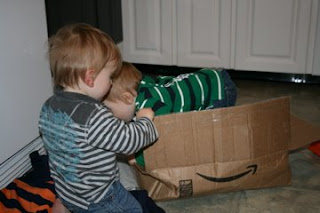 5. Throw the outfits all over the kitchen after parading around with them to ensure Mommy washes everything before wear. 6. Boxes are fun. 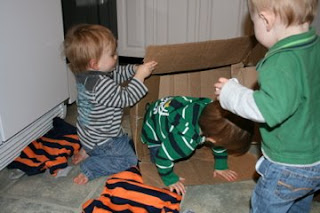 You would think that the sound of silence would be music to our ears. But no. Silence means that there is trouble. While I was in the kitchen fixing the boys' breakfast, there was pure silence in the playroom. Typically there are the sounds of fussing and screams over toy stealing or falling down. So I peaked into the playroom and saw (for the first time) all 3 boys standing on the big green chair, looking out the window. They were giddy. The back pillow was on the floor (which I'm hoping they did on purpose to break their fall). By the time I grabbed the camera, Charlie was already on the floor playing with another toy. 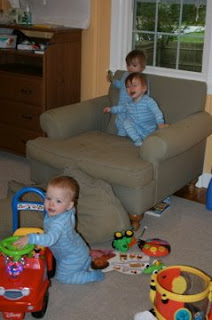 Besides climbing on the furniture, the boys' new favorite "toy" are their Red Sox hats. As proud members of Kid Nation (thanks Jamie & Meg!), every time they put their hats on, they parade around the room. It's hysterical to watch them literally march around, so proud. Now every time I say "hat", they touch their heads.
Wes & Win marching around the room 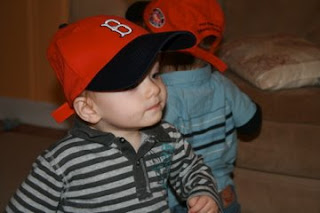 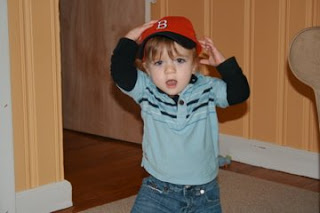 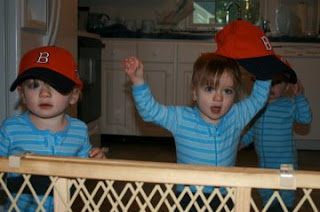 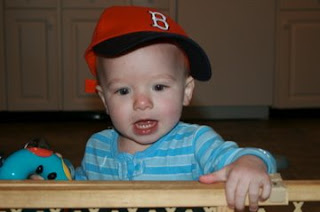 I mentioned awhile back that an old college friend (now professional baby photographer) photographed the boys on their first birthday. Visit her site to see her work: Boston Baby Photos. Here are a few of her fantastic shots of the boys: 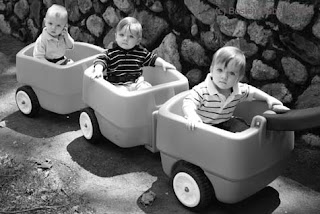 Hanging out on the wall 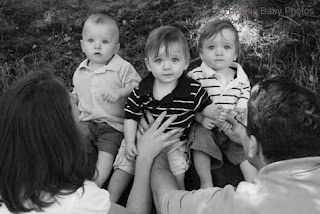 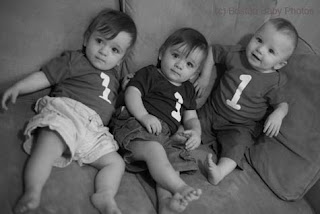 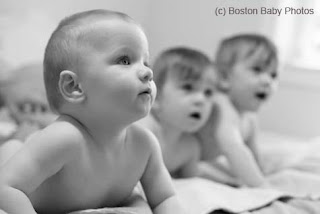 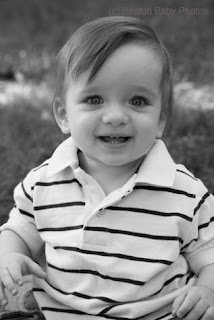 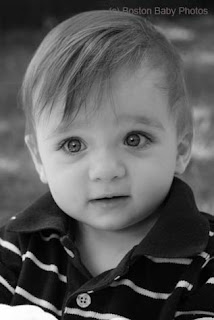 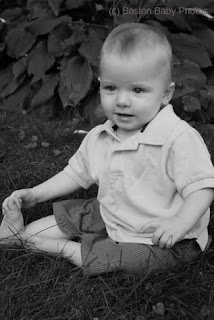 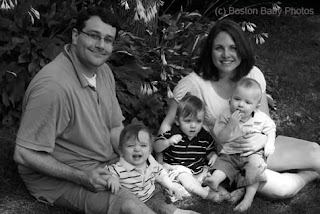 We have another nephew!

Lala and Bias (Lori & Tobias) welcomed their son, Liam Christof Erich Janke into the world yesterday! Everyone is doing well, but please pray for Lori's recovery and for Liam's lung maturity, blood and blood pressure. He arrived early, so he is in the NICU. Please pray for the hands of the doctors and nurses that are caring for them.
Posted by The Bunns at 9:54 AM No comments:

While Ginger racks up hours thoughtfully documenting our experience with the boys, here is Daddy's contribution...

We brought the boys to Costco for the first time yesterday. Yes, perhaps not so smart to do so on a Saturday when they are mobbed. But, as you can imagine, we made quite a scene while I pulled them in the wagon and Rob pushed the cart. We even ran into a woman who was a triplet herself! But their favorite part was their new toy from the store: a huge box.

Wesley and Charlie climbed right in 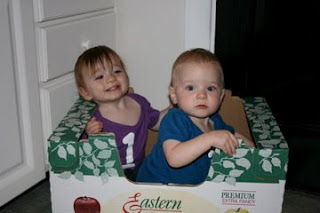 Winston discovered he was missing out on the fun 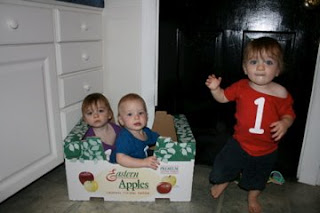 ...and decided to climb in with his brothers. 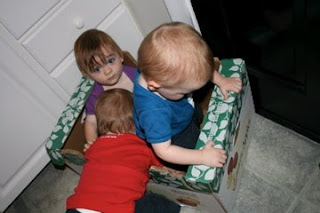 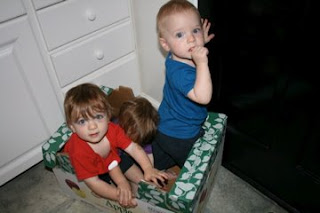 We also had a fun week of play dates. Stephanie brought her 9 month old twins, Sophia and Ethan, over to play. The boys also got to play with Lucy & Owen, whom they have missed for the last two weeks while they were away on vacation. And wouldn't you know that I missed out on photos from their visit! Just close your eyes and imagine the triplets and Owen all in the ball pit together. And Lucy and Owen showing the boys how to ride their cars. Much fun.

Ethan, Sophia and Winston (yes, he has a black-eye) 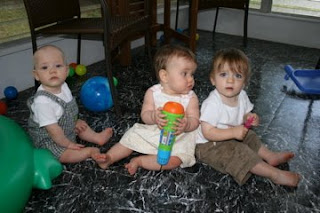 Ethan smiling for the camera 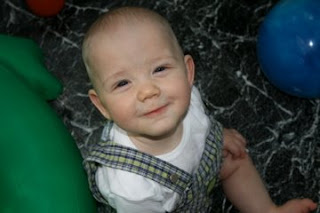 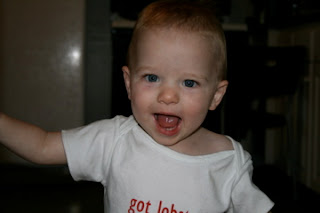 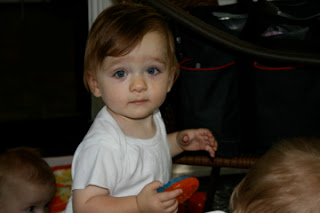 I just came across this Psychology Today article titled "What's it like to be a triplet?". I imagine it is different for every set of triplets, but we can certainly relate to the parents. We've already been warned that the boys will be split up into different classrooms once they start school (unlike the family in the article). And I'm hoping they are all best friends - unlike these kids! But it is a good reminder that we need alone time with each of them, as opposed to always thinking of them as a unit...or a gang...
Posted by The Bunns at 10:46 AM No comments:

I seem to keep forgetting my camera!

Our dear friend Carl came over Saturday night to hang out, help baby-proof the kitchen, bring us tomatoes from his garden, and enjoy a meal together on the sun porch (boys included). We miss that he doesn't live around the corner from us anymore!

Sunday was a great day with the boys. The slept in until 7am (!!) and we all enjoyed a breakfast blueberry pancakes together (we're working on eating more meals together as a family). After their morning nap, we brought them to a (new to us) local toddler park. Great concept, but yet again we were outnumbered. Some of their favorite things: eating the wood mulch, eating the sand from the sandbox (by the handful), the swings and sliding head-first down the slide (whether we were ready for them or not). So after much playing in the sun, we drove the few blocks into town for some ice cream.

Monday was the great unveiling of all of Rob's hard work baby-proofing the kitchen. We took down the gates so they could now roam freely from the playroom to the hall to the kitchen to the sun porch. (The dining room and living room are still gated off...for now.) They were so giddy - it was so cute to listen to them squeal with delight and laughing! We enjoyed another family meal together on the porch, enjoying the beautiful evening. A great weekend overall!
Posted by The Bunns at 7:07 AM No comments: