Life under the Big Top

The crib tents are up! Tonight is the first night under the big top, so we'll see how it goes. But we're not off to the best start. Upon entering his tent, Winston started screaming that we unzip it. He did eventually fall asleep, thankfully.

But we couldn't help to feel sad that they couldn't do all the things that they loved: tossing toys/books/blankets back and forth to each other, throwing their stuffed rabbits and teddy bears to us and having us throw them back, being able to hold hands (Win & Wes because they could reach), and closing the door (Win). I have to keep reminding myself that these tents will keep them safe and we're not ready for a constant Monkey Party (toddler beds).
Charlie, Wesley and Win 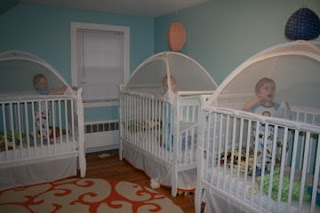 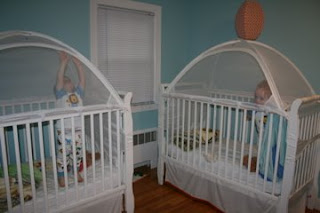 Wesley (checking out the back) and Winston (not happy) 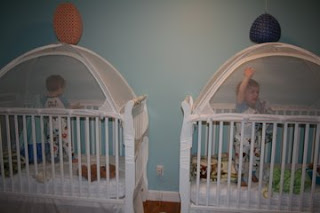 We just returned from a quick trip to the Cove (Maine). What was supposed to be a 4 day summer excursion with the boys turned out to be a day and a half (plus 7 hours of driving) in the rain. The boys did great in the car - we planned the trip around their nap, but they only slept for 45 mins each way. The rain really limited our trip, and I won't get into the absolute frustrations of being stuck inside a new space (to the boys). But it was hysterical that when we put them down for the first night, they were so excited to be in pack 'n plays right next to each other, that they jumped around and laughed and played for at least a half hour. We dubbed this playtime "The Monkey Party".

But the boys did get to meet their cousin (well, 2nd cousin once removed) Caroline. This is the longest they have ever sat for a photo. The trick? Snacks.

Win, Wes, and Charlie waving hi to Caroline, as she rests her chin on his shoulder 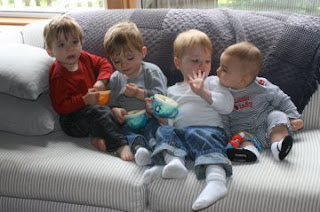 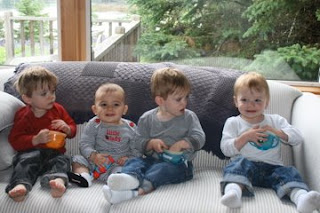 Winston sharing his snack with Caroline 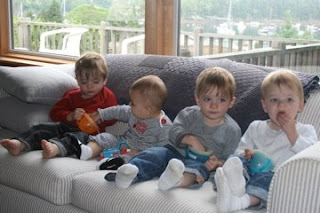 And we took the boys out to dinner to Shaw's Fish and Lobster Wharf, where they enjoyed an entire meal of french fries. And Wesley discovered a new love for tartar sauce.
Wesley the Lobster 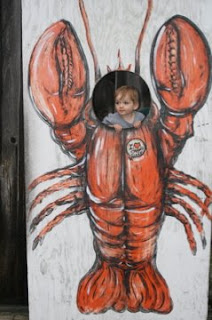 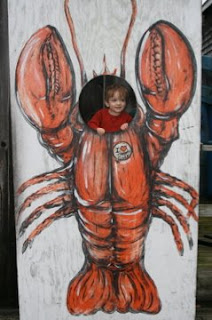 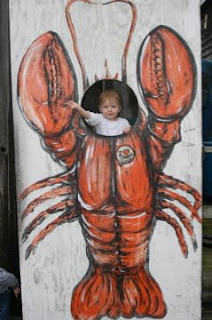 The best part about our 3 and half hour drive home in the rain was arriving home to Grammy and Poppy, waiting to help take care of the boys! We got to enjoy a family Father's Day dinner together. Happy Father's Day!
Posted by The Bunns at 6:37 PM 2 comments:

I woke up this morning to a very loud thud. Winston escaped from his crib! He and Wes have been taunting us by balancing on their stomachs on the crib railing. And head first over the railing Win went! I had placed pillows by each of their beds - just in case. But he missed the pillow and the rug, and hit the hardwood floor. Thankfully, he settled down and wasn't hurt.

So I have urgently been researching crib tents. I found a website that offered a triplet discount where you buy 2 and get the 3rd free. I tried 3 times to order these online and got an error each time. Then I called and they told me that I had to order online. Well, then. After many calls to other stores in the area, no one carries crib tents in the store - just online! So after more searches, I found the best price at Walmart, and ordered them. Hopefully the boys will all stay in their cribs until they arrive!
Posted by The Bunns at 1:35 PM 2 comments:

The last week has been very challenging with the boys - more screaming, hitting, throwing, less sleeping, laughing, eating. I blame the rain. And the fact that we are a month away from 2. They are toddlers. This morning will give you a good taste for the typical:

Goal: Leave the house by 8:15 to get to the gym. At 8:15, Charlie announced he pooped. So upstairs we went to change his diaper. I gave him a pair of socks to hold onto and brought down socks for W&W. Win then hit Wes, so back upstairs for a timeout. Downstairs to put socks on Charlie. But Charlie hid his socks. Put another pair on Wes. Timeout over. Upstairs to get Win, back down to put his socks on. Win finds Charlie's socks. Shoes on all. Jackets on. Walking out the door at 9. Win won't walk down the stairs. Get everyone in the car. Wes climbs into the front seat and pretends to drive. Finally, everyone in. Get to the gym, unbuckle everyone. Get Win and Charlie out and they are both holding my left hand while I try to grab Wes. C&W decide to hug and kiss while Wes climbs into the front seat. Can't open the front door because I already locked it, coax him to come out the open back door. Close door while holding onto all the boys. Wes gets his finger caught in the door!! Crying. Hugging and kissing. All better. Into the gym we go: 9:20. Halfway through my workout, I notice my pants are covered with toddler cream cheese hand prints. And to top it off, the only downpour we had this morning occurred while I walking them back out to the car. Of course.

A star is born 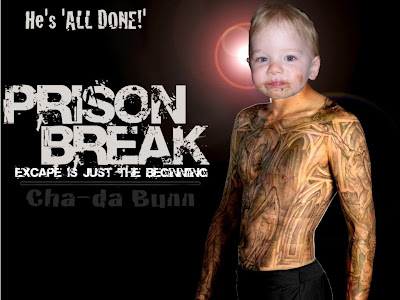 Charlie escaped from his crib today. He has been throwing his leg up over the side for a few weeks, taunting us. But during a timeout (in his crib) this evening, he was so upset that he jumped right over the side. We heard a thump and Rob went running in, only to find Charlie walking across the floor saying "All done!" Thankfully, this all happened when Win and Wes were not in the room (imagine the ideas they would get!) and we were actively listening for him due to his short timeout. God is good!

And I'm confident that I was more traumatized by this than Charlie was. Cribs are their (and our) safe haven. When you have three toddlers, all in the same room, containment is key. I often hear of triplet parents who have to put mesh crib tents over the crib, in order to keep the kids in cribs longer. Three toddlers, in one room, in toddler beds? Not an option. Imagine the all night parties they would hold!

Summer is officially here - we went to Maine! My parents (Grammy & Poppy) offered to watch the boys for the weekend so that Rob and I could go to Maine by ourselves. We decided to do all the things that we could never do with the boys. After a nice long walk with the dog, we drove into Damariscotta, ate at our favorite fish tacos at Paco's Tacos, and wandered in and out of art galleries and shops. After a 3 set bocce battle back at the house, we had cocktails with my cousins Kiki and Matt, Aunt Lois, Kiki's husband Josh and their daughter Caroline. Caroline is 8(ish) months old and just as sweet and adorable as can be. It was such a great weekend, though we really missed the boys!

We arrived at my parents' house Sunday, only to find the boys having a great time. They barely noticed we were gone. We went running down the driveway with open arms. The boys waved hi, then sat back on the steps to drink their juice.

I actually remembered to bring the camera, only to discover that the battery was dead. So here is a description of the photos you would have seen: purple lupin in full bloom, the beautiful Caroline, our champagne and lobster dinner, my victory lap after bocce, and our family cookout on Sunday.

Thank you, Grammy & Poppy, for such a special weekend!
Posted by The Bunns at 2:31 PM 5 comments:

We had a great visit from Uncle Raymond last week! The boys loved their time with "Uncle". We enjoyed our time by going to the park, the local indoor playspace (due to lots of rain), dinner with our friend Carl, a date night for Rob and me, and of course, a visit to The Bakery.

During our time in Brookline, Uncle Raymond developed a deep and lasting friendship with the owners/bakers of New Paris Bakery. (If you live in MA, you will need to get their mini eclairs - they are out of this world!) They correspond and pray for each other, so it is always a treat to go back and visit Jimmy & Roula when Uncle Raymond visits. While we were there, the boys got their first official sugar high: 2 cookies and 1 mini eclair - EACH! I've learned to not question Roula's generosity - the boys loved it. It was also their first time the boys have been able to wander in a store - no strollers or wagons! And they did great (mostly because they always had a yummy treat in their hands).

I can't remember what the boys needed to see out the window, but it was necessary that they all stand on Uncle to see it! 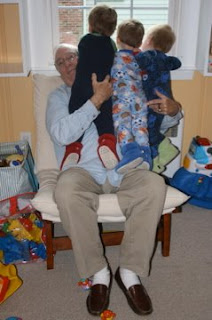 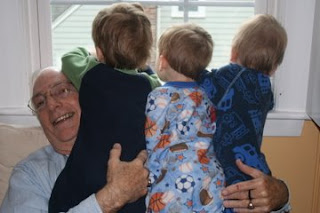