"...so that you will not grow weary and lose heart"

Today I had the joy of attending my weekly Mom to Mom group and hearing Linda Anderson (the founder) speak. Her talk centered around Hebrews 12: 1-3, likening motherhood as a marathon race that God has marked out for us. To get through it and "not grow weary and lose heart", she reminded us to free ourselves from unrealistic fears/worries or fantasies (I will be a joyful mother "as soon as" or "if only"...) and focus our eyes on Jesus. (God uses imperfect people - us - to raise His children).

This talk could not have been more timely. As some of you may know, we transitioned the boys to toddler beds (due to a broken crib tent) in February. These were some of the hardest weeks I've had yet as a parent - this includes when they were newborns and needed to eat every 3 hours!!

Allow me to attempt to describe my misery. I would put the boys down for their nap. Winston (typically the first one out) would hop down, perhaps climb into Wesley's bed, perhaps hide under his crib. Charlie would get down, and sometimes Wesley would as well. They would just play! And sadly, this was often the best playtime of the day. They pulled down the curtains. We literally have a hole in the wall where the curtain rod was once screwed in. I once went in and couldn't find Win and Wes - turned out they were hiding behind the rocking chair. Their favorite things was to all go to Wes' bed and strip off their clothes and wrestle. Wes learned he would get punished if he got out of bed, so he would ask Win and Charlie to come into his bed. Hence, we now call him the Puppet Master.

We tried everything: taking away blankets, giving them books, taking away books, going to bed earlier/later, taking away treats for later (dessert, videos), sitting in the room, moving Win to a pack n play in the guest room (he would just get out and go back to his room)! Nothing could keep them from turning naptime into playtime. The one tactic we settled on is the "silent return" (thank you Supernanny). I would stand outside their room and every time they would get out of bed, I would go in and silently return them to their beds. This would go on constantly for up to 2 hours!! Everyday!! For 3 weeks!! There were days I returned them to bed, I'm not joking, 60 times. Needless to say, I nearly ripped my hair out, discovered I have little patience, pleaded to God for help, called up Rob crying every day. It was awful. No, awful doesn't describe it. I had lost all joy. I was weary and had lost heart.

But right after I had spoken to some friends at church about feeling like I lost all joy, I put the boys down for their nap, preparing for another doozy. And after an hour of the "silent return", I was really losing it again. I was putting Charlie back in his bed and could smell a dirty diaper. As I changed his diaper, he started singing "I've got the joy, joy, joy, joy down in my heart"! We hadn't taught him that song - he must have learned it at church - but instantly my joy returned. God was encouraging me through a 2 and half year old boy!

Then, miraculously, things slowly got better after a few weeks. Sadly, they got better when the boys got sick and had 102 fevers. But I'll take it. Now, we have the occasional horrible nap (often when I put them down too late and they get a second wind.) They tend to stay in their beds until they wake up. And as I type this, I hear little feet shuffling upstairs in the hallway.

So Rob was giving the boys a bath a few days back, and he engaged in the following conversation with Charlie:

Daddy - Charlie, do you love me?

Charlie - No no. I love dumping water in my bucket.

Nice job, Chuckles. Good luck getting the bucket to put money in your college fund.
Posted by The Bunns at 2:26 PM 3 comments:

It seems I have only been able to post about once a month. Hopefully that might explain how awful the last 2 months have been. 2010 has brought sickness, a great visit from Poppa, sickness, more sickness, transitioning to toddler beds, and now more sickness.

At the start of February, the boys (one by one) came down with a horrible virus. They had fevers of 102-103 for 4-6 days each, along with an awful cough. It started with Charlie, and I made the mistake of calling the doctor early on and getting the advice to come in if it got worse, for an extended time. And as Charlie started to get better, I figured it was just a bad cold. But it took two weeks for all the boys to get better. I am not exaggerating: we were housebound for 13 DAYS! Awful. 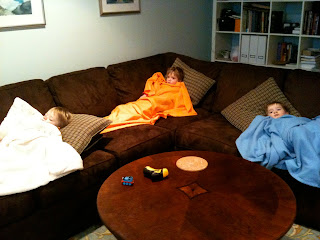 Sick activities? We built a fort out of a parachute, built cars out of cardboard boxes, painted, put stickers everywhere, etc. 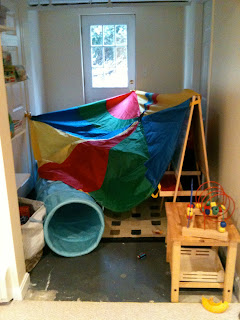 We had about 2 weeks that the boys were healthy - and now they are sick again!! All the boys were fighting a cold, but Wesley has had a fever again nearing 103 for 4 days and his barking cough was back, so off we went to the doctor. After a nebulizer treatment, we were given an antibiotic to treat an ear infection and possible pneumonia. Pneumonia! Oof. Poor guy.
Posted by The Bunns at 1:47 PM 3 comments: