I can't believe the boys will be 2 in 2 months! Where has the time gone. The boys love that the house is free of gates. I still don't think we would have survived had we taken them down any earlier, but it was good timing for their age/needs/development. They have gotten over the initial obsession with the new spaces, thankfully. They love eating with utensils (although they are still mastering this) and we are working on eating more of our meals as a family, with everyone eating the same food. (We're doing great if it happens half the time, but we're getting there!) And today was the first day that I saw the 3 of them make up a game, play together and take turns! They would run from one to the other and end in the play room, diving on the white chair, with their legs flying high behind them. When one boys diving on the chair, the other two would wait for their turn! Win and Wes also played their first game of catch - throwing a bow back and forth to each other. Well, since they weren't really "catching", it was really a game of "throw". Winston likes to ride his car around the house. He also likes to hoard toys, often walking around with at least 3 things in his arms. The two activities are often combined, with him piling "stuff" in the seat of his car, so it overflows so much that his seat doesn't sit level. It's an hysterical site! I often put on "doodah" (a dvd) while I cook dinner, but Win is not that interested in watching tv. It is so cute because he'll ride his car into the kitchen to help me or just sit in a chair and hang out with me. Win has gotten so much better about stealing toys or being overly physical with his brothers. He will often bring toys to Wes & Charlie if they are without, and we now focus on hugs and kisses instead of pushing and tackling. I was blown away when I put Win the scale on the bathroom and when it said 26.2, he pointed to the digital numbers and said 2! 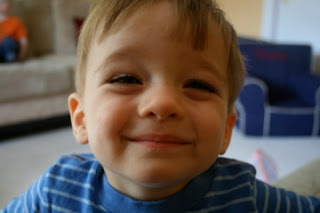 I'm convinced that everyday is a parade to Wesley. Whether he is in a car seat and sees someone as we drive by, in a restaurant, or in the wagon walking through a store, he always waves and says "hi". And it's a persistent hi - he's not satisfied until the other person says hi back (which is tough when you're driving by). And he'll then introduce his brothers "Cha-da and Win-win". It is so cute! Other adorableness...He always drinks the milk out of cereal bowl before eating. When outside, he always has a rock in his hand (as with Win). Always. He runs everywhere. From a standstill, he will start pumping his fists, high kick his legs and take off, even if its to get to the other side of the room. So the game of chase is big in this household. Wesley also likes to keep the pack together. When one of his brothers is ignoring me and say, not coming down the stairs to the car when asked, I can't use the "okay, we're going to go without you". Because the moment these words leave my lips, Wes reverses course to go get the missing brother. 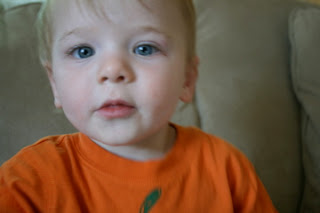 Charlie loves books and "doodah" and would watch dvds all day long if he could. Elmo is huge right now. He is learning and using new words every day. I just hung some family photos in the hallway, and every day will point out and name all of their cousins. Today Charlie saw a card that had a different photo of Christian and Alex (as he ran away from me as I was trying to grab him change his diaper) and he kept saying over and over "Christian Alex, Christian Alex". I couldn't get over that he made that connection! We were also reading a book today and he saw a guitar. He immediately pointed to the kitchen and said "Chick Fry". What he is saying is Chicken Fried, which is their favorite song (by Zac Brown Band). In the video, which they watch on my iPod, they play the guitar. Again, the connections! He also knows most colors and now likes to say "green cup" or "yellow spoon". He has also learned (can identify) the letters C and Q - which he pronounces "clue" and has counted "1, 2, 3, 5, 6". Who needs 4!

One thing that I need to get a video of is their "Brothers" song. Rob made up a song, which we all sing at the table, while holding and swinging hands. It goes like this:

Rob's parents (Nanna & Poppa) came for a visit last week. We had a great time taking the boys to a few parks and out for walks. The boys got to taste lemonade for the first time, as there were multiple stands open in the neighborhood. We also enjoyed a family dinner out at one of our favorite local restaurants, Wild Willy's. The boys are getting so much easier to take out to dinner - they drink out of straw cups, keep their (paper) plates on the table, scream less, eat more, throw less food on the floor. Nanna & Poppa even watched the boys last Friday so that Rob and I could go out to dinner to celebrate Rob's birthday. It was wonderful!

But wouldn't you know, I failed to take a single photo of their visit!
Posted by The Bunns at 2:26 PM No comments:

I am so blessed to be the mother to these three beautiful men! 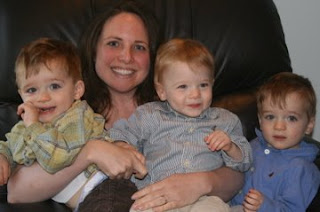 Rob and the boys got me a hysterical card that had two crying babies on the cover. On the inside it said "Aren't you glad we weren't twins?" Yes! I can't imagine life without any one of these boys. We had a wonderful day together - blueberry pancakes, church, a walk, dinner with Grammy & Poppy. And I didn't change a single diaper!
Posted by The Bunns at 12:47 PM 3 comments:

After pulling down all the gates for our Derby party, I have been obsessed with the idea of finally opening the entire house to the boys. First, we opened up the dining room. They have loved chasing each other in a circle: through the dining room, down the hall, through the kitchen, back into the dining room, repeat. The gate to the stairs kept falling down, so we moved it a few steps up. The boys spent the morning just sitting on the open stairs. The living room is currently gated off while we build shelves in a hall closet for the books that are in the triplet danger zone.
Wesley, Winston and Charlie (Right before I took the photo, I said "smile" and Win and Charlie actually did! Two out of three isn't bad!) 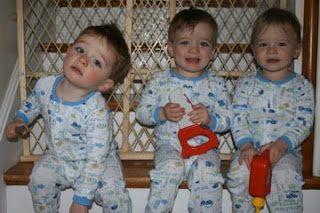 My parents (Grammy & Poppy) watched the boys last weekend, while we threw a Kentucky Derby party for the neighborhood and enjoyed a visit from one of my dearest friends, Lizzie. It was such fun! If only we caught a photo of Rob in his seersucker suit and bowtie and me in my Derby hat! When we picked up the boys, Grammy had made my favorite birthday cake, which the boys loved.
Wesley 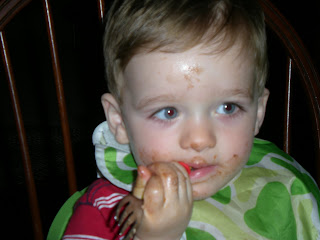 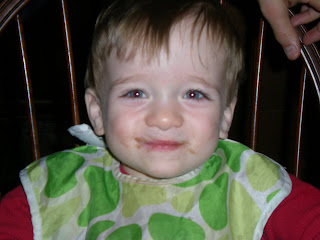 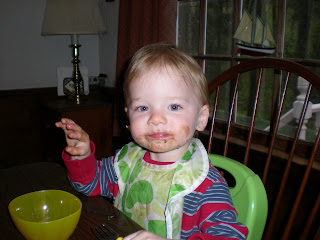 My parents have taken a birthday photo of me with daffodils every single year. The story goes that when my parents left for the hospital (to have me) the daffodils hadn't bloomed yet, but when they returned home with me, the daffodils were in full bloom! 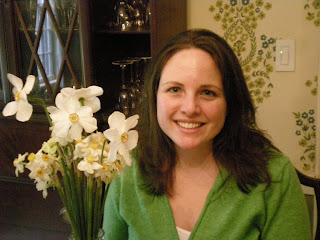 Win chatting on Rob's Blackberry (He quickly figured out how to program speed dial!) 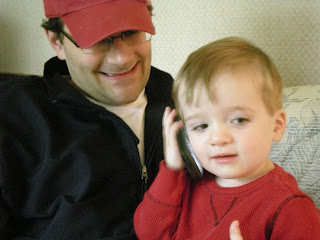 I have been searching high and low to find outdoor toys for the boys. With a few days last week in the 90s, we have tasted summer, and the boys are loving playing outside. So after their haircuts, we pulled out their new cars and chalk and playing in the driveway. (Our wonderful neighbors are letting us borrow a huge gate to keep the boys in the driveway - a must!)
Charlie in the "minivan" - complete with faux wood stickers. 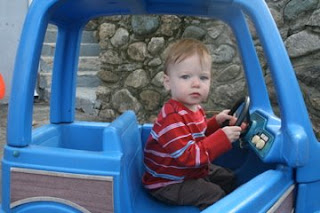 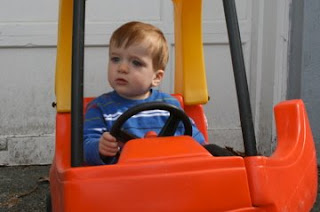 Making a break for the crackers 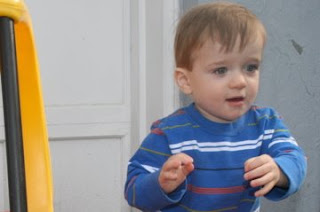 Wesley. Put a suit and briefcase on him and he looks like he's driving off to work! 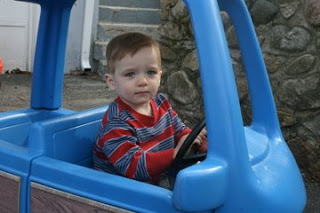 Outside with Grammy & Poppy 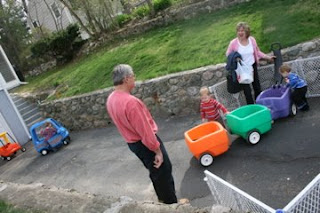